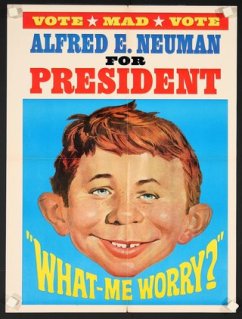 When the person likely to be the next U.S. Senate Environmental Committee chair wrote a book called The Great Hoax denying global climate change, maybe it’s time to address a new strain of anti-intellectualism… delusion.

American ambivalence about intellect isn’t new. From the beginning Americans have favored plain-speech and uncomplicated thinking. They’ve always believed in simple answers to every complex problem. Trusting in fresh perspectives, putting aside received truths to encounter issues anew, that produces answers. The utopian “City on the Hill” faith in the possibility of starting over created the constitution.

However, the founding fathers, for all their flaws, were no dummies. They were subtle men whose elegant (and inelegant) solutions arose from rumination, deliberation, persuasion, and resourcefulness. They embraced complexity and kept up with the political science and regular science of their day.

They did not, as some do now, solve problems by denying they exist and vilifying any “overthinker” or “alarmist” who looks too closely.

Social scientists can offer decades of research on interdependent causes of poverty, and still some Americans cut through “all the crap” with the real truth—that some people don’t take advantage of opportunity. Graphs depicting the imbalanced distribution of wealth inspire yet another rags-to-riches tale, and, if social scientists unfavorably compare economic mobility in America to almost everywhere else, someone will assert the possibility, no matter how remote, is all that’s important. And, because if you work hard you should get ahead, those left behind must not have worked hard enough. They ought to blame themselves, the thinking goes, so helping them, giving them “handouts,” only saps their will to try harder. Cite economists who explain the mechanisms of inherited wealth and the game of musical chairs everyone else plays, and you’ll be accused of fomenting class warfare, plotting to rob the deserving, being a socialist. The deserving believe in “the market,” as a counterbalance to (and not a manifestation of) human greed—no regulation or redress is necessary.

Americans untroubled by economic inequality are equally prepared to discount social inequality as a vestige of bad old days now gone. The mountain of statistical and anecdotal evidence demonstrating white privilege, they judge, only rationalizes indolence. Some go as far as to say the problem of race in America is solved, and any talk about persistent intolerance—surrounding class, creed, and sexual orientation—only reignites dead flames. It seems as long as you believe you are not personally (or at least not obviously) racist, sexist, and bigoted, these issues don’t exist. And expressing desire for equity elicits petulance. Pundits cry they’re not only blameless but also oppressed.

Though in scientific circles, human causes for climate change are rarely debated, some Americans choose to believe we know nothing and can know nothing about greenhouse gasses and the melting ice caps. They treat scientists with disdain, either correcting them (very slowly, as they would a child) with fundamentally flawed conceptions of the physical world or, alternately, declare, “I’m not a scientist” to turn ignorance to their advantage. Both responses share a view of science as evil and/or unintelligible—sorcery, not one of humanity’s best methods of seeking truth.

The catalog could go on: Gun control, environmental regulations, banking abuses, corporate tax loopholes, and healthcare divide along similar lines with some seeking to study problems and devise solutions and others carping there IS no problem. If anything needs to be done, the carpers say, it’s rolling back the meager amelioration managed so far.

To be fair, sanctimony exists on both ends of the political spectrum. The left dismisses opposition as much as the right. Neither listens to the other. Most Americans, left or right, read and watch only what echoes their viewpoint, facts be damned. Worse, Americans’ healthy appetite for drama has inspired the creation of loud and insistent megaphones to shout half-truths and whole lies. Subtlety and intellectual rigor aren’t, everyone knows, very sexy.

The conservatives’ position seems more dangerous, however. It’s much too easy for them to get away without persuasion or policy. In making ignorance and denial viable political stances, they’ve institutionalized distrust of scientists, economists, environmental experts, social scientists, and intellectuals devoted to study, discovery, and—let’s be direct—reality.

And, in the process, their delusion has infected the general electorate with a nearly nihilist sense of hopelessness. How do you argue with someone who believes there’s nothing to argue, who vows nothing is known conclusively, who says nothing can be done, and, moreover, should be done?

A Dozen Paths To the End of the World 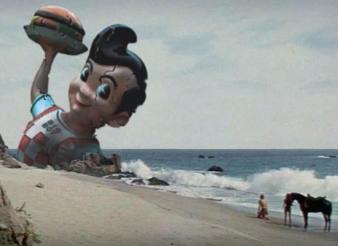 The number of apocalyptic movies, books, and news items out there led me to consider possibilities not yet fully explored. Too lazy to actually write them, however, I made it only as far as these twelve stand-alone sentences.

1. One of the more comfortable citizens first made an object stone by claiming it, but, by noon the next day, the entire town was solid.

2. Naturally, the last duel had no spectators.

3. Everyone started piling bicycles at the city limits and soon they’d walled themselves in with their only remaining means of escape.

4. For the longest time, the kind-hearted lived in enclaves, but jealousy outside assured they wouldn’t be left alone.

5. Someone else might have known the footprints he followed were his own, yet he noticed only when, too tired to continue, he sat down and examined them closely.

6. Their hairstyles grew so elaborate their necks lacked the strength to lift them.

7. Each bridge began on one shore and ended at its apex, just when building further threatened falling in the river.

8. They could have company, the letter said, if they learned to bake bread that filled the air with enticing smells, but their sort of baking was a gift they wouldn’t give up.

9. No one considered you could do nothing so long that nothing could be done.

10. In the courtyard’s strange echoes, birds seemed to speak in human voices, and soon neighbors, then strangers, stopped working to gather and listen.

11. Had not everyone been whimpering, someone would have quipped the world ended with a bang after all.

12. He sat south of the jetty near shops long looted and empty to watch the sun rise, expecting, any day now, it wouldn’t.