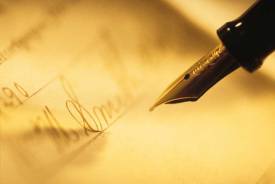 She started when she was young. Her secrets should be lost, she thought, and once she’d spilled her emotions, words’ effectiveness ended anyway. In the beginning, she never returned to her pages except to assure they’d faded and, sometimes, if they didn’t, she sought an unnoticed patch of sunlight to erase them.

Friends and family watched Joan march parades of words through her notebooks, the prose dropping like a curtain line after line. When she was a teenager, her father counted notebooks on the shelves in her room, called her “His scribbler,” and pleaded.

“What stories you must have told by now—why won’t you let us read?”

Joan stared at the page and pretended to recite what she found there, all of her speech invented, all of it strange and estranging. Her father listened as well as he could as long as he could but soon found reason to leave. Joan hid her notebooks after that.

Though she needn’t have. They were empty. When she left for college she discovered she could refill the earliest books and did, again and again, wondering whether she followed the actual ruts of what she’d written before or how these thoughts might echo earlier ones. Nothing seemed fresh, and, try as she might, her dreams of novelty disappointed.

Her husband was the one who encouraged her to become an actual writer. By then she’d stopped refilling notebooks, but her family told stories of Joan’s late hours poised in a puddle of light at her desk, her pen pirouetting. For their first anniversary, her husband bought a fountain pen, sturdy ink labeled “archival,” and several blank books with pages opaque as canvas and suitable for sails.

Joan started immediately, and the habit came back like breath. Soon, her husband fell asleep to her scratching. Moons presided over tidal confession.

He wanted to hear what she was saying to her blank books, but, through an odd alchemy, something in Joan’s mind and hand invaded the pen and transmuted the ink. Permanence, it turned out, didn’t arise from circumstance as much as routine. What she’d written the week before disappeared as it always had. She kept books closed to preserve words, but—in light or darkness—they slipped from sight. Joan cried. The tears washed pigment from the page.

For some weeks, she traced the trail of prior days’ signs, but her hand cramped, her mind quit. Shadow overtook her. In its wake, little remained.

So Joan pretended again, speaking invention instead of reading. Blank books gathered in plain sight, but her husband, respecting her privacy, stopped asking.

Then Joan only sat at her desk, studying her husband’s sleep and dreaming what writing might mean, imagining her words honored by attention, their sounds real, important to more than her.

Thoughts of a Struggling Diarist 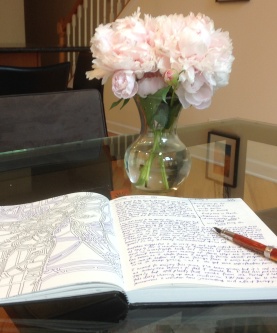 Lists of famous diarists run many pages, going on so long you begin to believe anyone who desires merit must keep a diary. I know I’m confusing correlation and causation, but journal writing has been urged upon me so many times, there must be something to it… that so far eludes me.

In my backpack I keep a notebook where I occasionally jot ideas. It includes recommended books and movies, sentences revised and re-revised, odd overheard statements, and strange sights. My attempts at a daily journal, however, typically fail. A few days in, I ask why I’m telling myself what I already know or why it’s vital to describe in tiresome detail events that just occurred and hardly seem worth remembering. Writers laud journals as practice, which certainly makes sense, but my skepticism rears. What kind of practice? My audience, myself, will accept any old thing, and, though he’s unimpressed with the familiar, gets little else. If I perform the way I rehearse—which most people do—journaling won’t create brilliance. Quite the opposite.

I never re-read. Though writing-to-think is a valuable process, my journals meander in the dark, prodded by obligation, trying one direction and another and hoping, half-heartedly, to trip over treasure.

If you’re a journal-er, you’ll say my problem is the author. I do wonder—if I can commit, will I discover how life changes when I record it? Since school ended, I’ve been trying again, scheduling a regular visit to a blank sketchbook filling up with scrawl and doodles. The secret, I tell myself, is to think of this journal as a savings bank where investments in self-examination will grow.

According to Susan Sontag, it’s “Superficial to understand the journal as just a receptacle for one’s private, secret thoughts—like a confidante who is deaf, dumb and illiterate.” For her, the journal is not a place to “Express myself more openly than I could to any person,” but a place where, “I create myself.”

“People who keep journals have life twice,” Jessamyn West said, and Anaïs Nin called her diary “My kief, hashish, and opium pipe… my drug and my vice.”

One of my former colleagues kept journals and, during one of his free periods each day, covered exactly one page. I watched, without reading, as he somehow spent thoughts to die out on the last line. He didn’t share his entries with me or anyone and said he had shelves of journals dating back to the sixties that he never, never, never revisited.

His writing was, I’m guessing, a continual reshoring, a levee preserving his sense of himself. Without reading a single entry, I picture him reassuring, encouraging, redesigning. In my imagination, he plans how to be, his range and domain.

But my experience so far tells me I’m romanticizing. My entries are dull, larded with worries about productivity and self-worth… which, it turns out, are often the same thing.

Resemble some deep old desk, or capacious hold-all, in which one flings a mass of odds and ends without looking them through. I should like to come back, after a year or two, and find that the collection had sorted itself and refined itself and coalesced, as such deposits so mysteriously do, into a mould, transparent enough to reflect the light of our life, and yet steady, tranquil compounds with the aloofness of a work of art.

I’d like that too. But how do I become Virginia Woolf? How do you ask so much so regularly? How do you battle the relentless, regular tide of personality? How can you try so hard when no one watches or cares?

These mysteries I can only settle over time, I tell myself. Right now, my journal feels like investment, pretty in its script and drawings… but vapid. I have almost no interest in history, being able to say on such and such a day such and such happened, but then what am I interested in, what steady voice emerges?

“The impulse to write things down is a peculiarly compulsive one,” Joan Didion says, “inexplicable to those who do not share it, useful only accidentally, only secondarily, in the way that any compulsion tries to justify itself.”

Maybe my journal writing will only become important as it approaches compulsion, as it embraces no justification beyond blind obsession.