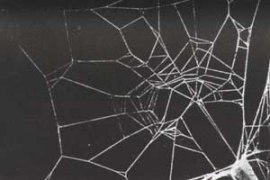 Most spiders build well or beautifully. A special few do both, their art being function and their function being art. Dewy mornings display their webs’ perfect parallels and perfect circularities, and, though their work couldn’t be more visible, they catch wary prey looking too close. Drawn like moths to light, their victims barely struggle in the sticky strings of arrest. Acquiescence overcomes will. Even things that once flew know they’re had, and the web maker feels no impatience to meet and complete its kill. You’d call that sort of restraint self-control, but it isn’t control exactly when command requires little effort. Such a spider issues such a web, and waits. It seems made for that life.

There’s another spider, though, whose webs are neither expert nor special. Its abdomen is stuck open and launches filament after filament in a tangled, impatient mass. Its eight perpetually scrambling legs carry it from place to place, away from its leavings and toward any empty cranny, dragging its ductile chains. Design may govern even things so small, but this spider knows little government other than compulsion, moving because it must, because it cannot not. You’d recognize its webs—after so much practice how could they be anything but consistent?—but, unless you mistake uniformity for artistry—you’d find little to admire, especially when comparison is so easy and ready.

This spider feeds on the accident-prone, insects wandering from common paths and into shadowy niches. Bad fortune carries the spider’s food to the wrong places, and the spider, ever grateful for the least attention, wraps victims almost before they know they’ve been duped. The spider knows its clientele and strings the landscape with traps. It can’t do otherwise because no advantage lies in one well-made thing when making rather than capture dictates life. It wants to eat, that’s all. It needs to express sticky strands, so a diet of gnats is as good as a grasshopper.

The work of peers passes as the spider moves to undiscovered places. You’ll see no grumbling in its steps. There isn’t time but there also isn’t envy. Part of knowing place is knowing context. The spider sees its ways relative to others, and their judgment is his own. Sometimes, passing under the great arc of a masterpiece, the spider dips its head and recommits to the path before it, but whether that’s bowing to emulation or oblivion is unclear. Neither shows in its next effort in any case.

An ending to its restlessness might be welcome. Were its supply of web to cease, the spider could be content to play caretaker, to wander among its many webs watching to see if anything unsuspecting remains to be caught. Eventually the spider would see all the strands break and maybe then it would feel loss as its life dwindled, but perhaps not.

What future awaits has little place in the spider’s attention. It looks for new space. It means to work. 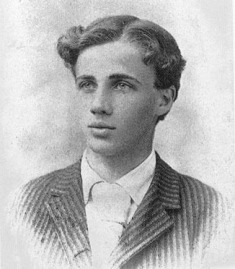 At least once a year I teach Robert Frost’s “A Road Not Taken” and watch some of my students glom onto its easy dialectic. They confirm the last line, “And that has made all the difference,” with nodding assent. Sure of a future they will create, they see themselves starting a journey that will end with rocking on a front porch, chewing on nothing, and reconsidering this day, this hour, this minute.

I lead them toward alternate readings. In letters and interviews, Frost said he disapproved of sighing over what might have been, and, when you study the last stanza’s syntax, the voice of the speaker appears over-the-top, self-important, bombastic and mocking. Frost’s poetry often states and un-states just that way, secretly complicating what it appears to simplify. Yet many students resist the idea that choices don’t matter. They reject Frost is so cynical. A couple will hint the cynicism is really mine. Someone will say I must be getting the poem wrong.

Imagine if you could trace everything about you back to a specific cause or single moment. You would be someone else entirely had you been born a day later, trusted where you doubted, chosen another word, waited instead of going, taken a different hike through the woods one day. You might have met the person you were meant to meet or stepped, you later knew, into an entirely different existence.

But we don’t really work that way, or, at least, it’s only so clear in movies. All our thoughts about ourselves and our paths are partly true, partly imagined, partly self-fulfilling. Other parts we can’t even consider, much less name.

When I was my students’ age, I believed in making sense. Given the time, the energy, and the will, I might sort out anything. I wrote essays with beginnings, middles, ends, and, by the conclusion, I’d convinced myself. Once my thesis was confirmed and the form fulfilled, the task was complete. The next paper awaited. No knot was too knotted, no possibility impossible. I could get there and was in a hurry to be finished.

Only the inexperienced, deliberately deluded (or maybe Ron Paul) can see the world so simply. I wonder when it occurred to me that you can’t always finish.

But I’m not sorry it occurred to me. The opposite of one route making all the difference is infinite revision, the opportunity to take a different way no matter how you’ve arrived here. The negotiation between “might have been” and “might be” can be uneasy, but it is a negotiation. You learn, you hope, from all of it.

Maybe it’s my age, but I’m not in such a hurry to be finished anymore.

And among all the legalistic, argument-driven, evidence-laden, pronouncement-centered essays students submit, I sometimes find some that know life isn’t a highway. These papers aren’t the sort of wandering I usually encounter in their writing, meandering that arises from uncertainty. These writers aren’t lost. They find strange comfort in roaming, delighting in ways that lead onto ways and noticing where grass wants wear or accepting another journey might be just as fair.

“Writing,” one of my high school teachers said, “Is never finished, only abandoned,” and, at the time, I took her statement as a lesson in perfectibility: as long as I persevered, I might explain it all. Now I’m reconsidering. Maybe she was urging me not to finish, to keep writing and writing and writing and not to abandon the pursuit even when I finished assignments.

My students misunderstand me. That way of thinking isn’t cynical. I’m not saying choice doesn’t truly matter or that choices don’t make a difference. I’m saying every choice does, and all we can know is that every path counts. There’s nothing wrong with exploring.

I haven’t really figured anything out yet.