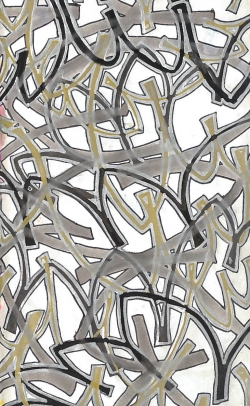 Surprise! Even on the internet, something defies discovery.

In 1982, visiting a graduate school classmate’s Massachusetts home, I heard a comedy album collecting Vermont humor, a combination he called “a contradiction in terms.” The only joke I remember is…

Farmer, I’ve been on this hill for an hour now, ain’t there no end to it?

It wasn’t really funny then, and, muted by time and missing a Vermonter accent, it seems less funny now. Still, it sticks. I hoped the oracle Google might peg its provenance, but she turned up nothing—despite every combination of entreaties.

I’m asking too much, have traveled too much. Who wrote and/or told the joke doesn’t matter. Its persistence does. I’ve climbed many hills since, most of my own making.

When my daughter was young, I learned about “catastrophizers,” people who validate adversity and see struggles as graver than they really are. A broader—probably more personal—definition might include those who endow their lives with meaning according to real or imagined obstacles. It’s a terrible but persistent habit.

Sometimes, my own hill feels endless. The formula says, “Must I always be second?” or “They are all against me,” or “I just can’t catch a break” or “When will my train arrive?” Separating reality from perspective sometimes feels impossible. I subsist on my perspective. Without hind wheels, I climb and climb.

For years, I’ve been looking for anyone who can tell me what hill I’m actually on, but we’re all on hills made steeper by their being ours. I accept friends’ preoccupations because I have so many myself. They have—we all have—our troubles. Still, oddly and irrationally, a voice says, “What about mine?”

It’s selfish to crave recognition in this distracted and overactive time, but I look for moments someone turns to regard my hill and, however politely or secretly insincerely, says, “Yes, I see.”

This week, I retire from teaching after 37 years, but, for all the fond memories that time represents, it’s early—not only because I’m just 60 but also because, aside from missing hind wheels, I still have something to offer. The stereotype of an “Experienced” teacher features shuffling yellowed notes, telling students “Well, that’s your problem,” and meeting each wave of pedagogical innovation with “Not again,” but that’s not me. I still love the people I teach. Caring about their learning has sustained me over so many cycles of September to June. I’m just tired, though ready to travel on.

In my fantasy, the farmer offers help. He backtracks until we find what’s missing. He overlooks my self-absorption. He affixes the old wheels or new ones or a facsimile and sends me off, saying, “Stranger, we need wheels. Let’s hope these are meant for you.”

One response to “No Joke”