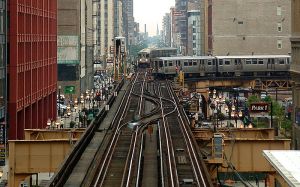 The key wouldn’t turn the way it needed to. He tried for some time and then had to go to work. On the way he told himself an unlocked door is fine as long as no one tries it, and he couldn’t be late again or he’d have no money for rent.

He thought briefly about calling her because she still had a key and might have the touch to make the lock work. She did much better with objects, understood subtle shifts of position and emphasis that made them cooperate. Every thing seemed troublesome to him. At first, she’d found his confusion charming and laughed at his clumsy handling, but her impatience grew like a bass hum in an audio line, building until it overwhelmed the signal.

On the day she left, she locked the door. He returned expecting to find the apartment open and her inside making something to eat, as that morning she’d offered. Instead, he found a note on the bare table explaining she’d taken most of her things and would be back for the others that weekend. Nothing in the note explained why really, but he understood.

They could be friends, she promised.

He’d be late anyway. The L always chose the worst time to delay and, between each station, a voice announced, “Your attention please: We are standing momentarily, waiting for signal clearance. We expect to be moving shortly.” Sometimes the message just finished as the train lurched to life, the air conditioner stirring as it engaged. Sometimes the lull continued, passengers doing their best to pretend they hadn’t heard.

“What are your ambitions?” she’d asked him once.

He shrugged. The degree he’d earned wasn’t practical, and, encouraged by his parents to “follow his bliss,” he’d never thought much about income. He’d always worked, never at anything, however, he’d devote a life to. He settled between jobs. He knew what he’d like and what, in the meantime, he might do to get by. When the getting by squeezed everything else out, he felt strange relief. Absolved from dreaming, he could live instead.

She might have left him when she took her new post or three months later when she received her first promotion. He took her staying as proof she loved him as he was but also detected her restlessness, the way she seldom sat with him anymore, never simply read or watched something with him.

Before the L reached his stop, he’d vacated his seat for an old man bent by labor or some previous injury into an awkward S. They’d passed a light smile, and he thought momentarily about speaking but recalled how she hated that, her forced laugh when he’d explained his parents’ faith in casual conversation.

One of his friends asked if he knew she’d started seeing someone else. He said, “Yes,” though, of course, he hadn’t. In retrospect, the hints lay everywhere, but he’d thrown himself into work, taking unnecessary shifts and covering co-workers when they or family members became ill. She’d scolded him. He might have noticed how he neglected her.

“And for what?” He almost said the words aloud.

Every time he passed through the revolving door at the station he had to think which way to turn—something in the bars scared him, and those exits always reminded him of factory machines to knead or slice bread. A man in a business suit behind him almost ran over him. He glanced back in mute apology.

On the street, peeking at his phone, he saw the hour had passed. The manager wouldn’t really be angry because he’d been a dutiful employee and a good co-worker, a good boy. Still, involuntarily, his pace quickened.

Their first conversation after she left was to arrange a meeting that never happened. She needed to talk to someone, and he said he had a conflict too. Since then, they’d spoken twice on the phone. The second time, he’d meant to be dignified when she asked how he’d been, but he’d been honest.

She tried to console him, but nothing she said stuck.

Down the block, he saw the familiar storefront and one of his coworkers cranking the handle to release and extend the awning. That was his job, he thought, and then he heard his own voice, barely audible on the busy street.

“Go home,” it said, “call a locksmith.” And, before another moment passed, he turned and went.