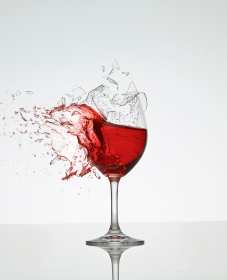 The broken glass lay at his feet, the base a disk and the stem and bowl a threatening tulip. Looking around, he saw shards several feet away. The red splash spread everywhere.

Strides carried her from the kitchen. He assumed she meant to retrieve a broom, but, waiting, he realized she wouldn’t.

When he grabbed the broom himself, he saw their bedroom door closed.

The next moment, he found himself, hands and knees, plucking pieces of glass from the wine spill, the broom nearby, watching him. When he put his palm on a fragment, he felt the alert and lifted up immediately.

The pain reached his brain and still the blood flowed from the cut as from someone else. He sat back, disgusted, unconcerned he might be sitting in his own spill.

And then tears. What didn’t trouble him: the wine glass—it’d been a wedding gift and they’d been married 25 years, the mess—he’d made bigger messes and, no matter what his state of mind, had erased them, the kitchen—it’d seen greater debacles, greater tragedy.

He wasn’t quite sure why he wept. Lately emotion came from hidden places, great streams from untraceable springs, but no bounty. He found so little to be happy about. He didn’t know himself.

She might be crying back in their bedroom, and he’d have to say he was sorry again for something that meant little but stood for more. She’d told him. He’d known how little room he had for mistakes. She’d told him.

And still the moment spun.

“’Well aware?’ Professorial bullshit! And what are you aware of, exactly?”

“I’m only trying to explain—“

“You mean you’re only trying to excuse… professor—“

He threw the glass—not hard, but he knew he did—and didn’t properly remember it. He returned to being fourteen, the fist thrown from oblivion, words spit like poison he couldn’t swallow. Once, in college, he’d discovered his hand covered in blood and hadn’t known if it was his. Once, after that, he’d opened his eyes to bodies towering over him, his jaw an ache.

Blood dropped in tears from the cut on his palm and still he collected the glass, piling pieces to create what order he could. He staggered from his knees and surveyed the scene.

“After I clean this up and she’s realized…” he told himself, “I’ll knock on the door. I’ll apologize again.”

One response to “Broken”