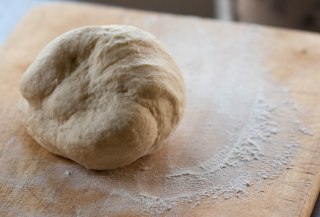 The other night, I dreamt of baking or, more accurately, of trying to bake. My dough reached the awkward stage when it should have formed one mass and instead insisted on crumbling cliffs of loose chunks falling in landslides, the relentless earthquake of failure. I worked the mass with a spoon and with my hands, added water and oil and a number of dream ingredients like tubbed bouillon and lemon zest. Still—no bolus, no bread.

For any Freudians listening in, I know, I know.

Even without Freud, however, this dream seems pretty transparent. It’s about the creative process, about times (like this one) when the moment calls for collection and synthesis, and nothing will satisfy more than a combination of incongruities ending in miracles. That my dream dough doesn’t achieve bread says something big and speaks to questions my recent writing raises.

Most notably, what magic will transform parts into a being?

Some nights I swing between unconsciousness and nutty, irrational, aggregating thoughts. I can’t think where I am and can’t answer how many hours I’ve “slept.” The clock says “11:17,” then it says, “12:45,” later, “3:28.” I hate these numbers and remember them. And each feels, at the time, like revelation.

Somewhere in my dream of dough I thought of Gollums, creatures assembled of clay and enacted by rabbis. My Gollum didn’t speak or walk, didn’t blink. He gave no sign of cooperation in genesis or animation. He never was, and yet I summoned him as if he’d come.

That’s faith. Even unanswered, it persists. You’re sure something must happen, if only by accident, some combination of words will form a spell.

I used to be a prolific visual artist. Every week and weekend, I’d produce a new image. Most of it was abstract, improvisational, and surprising because it was unplanned. More serendipity than scheme, my paintings arose from some deep unconscious memory or impulse. Their yeast was self-assurance and confidence the next step would swell the stuff. It’d declare its own end. I knew—or thought I knew—an outcome would materialize.

What do you do if such assurance disappears?

There’s much to be said for ambling, overturning rocks in hopes of finding something interesting beneath. That said, I sometimes long for an assignment. I’d welcome the chance to receive direction in place of supplying it myself.

A professional writer might say, “Be careful what you wish for,” but conception is tiring.  Twice a week I need a subject that mustn’t be world-weariness. I count on inspiration. I count on novelty. I’m waiting for another voice to tell me to get going on the ark or to desist building this crazy tower to God.

Maybe every artist, on some level, desires direction. It’d be nice to feel moved, to find compulsions quite outside yourself. Yet muses rarely speak. You invoke them, invoke them again, and still they wait, looking for the perfect entry. You hope, in the end, to produce something and experience a glancing brush with inspiration, and to speak.

Whoever knows if you actually do.