Speaking Impersonally (And For Myself) 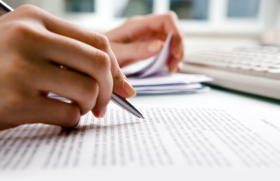 A small figurative fire broke out in an English department meeting this fall when we discussed critical essays. The dispute started with whether students should be allowed to use first person in their essays and spread to bigger questions like “How equipped are high school writers to compose critical essays?” and “Can vital writing skills be taught exclusively through personal writing?” Our questions follow in the wake of recent debates about proper methods to teach writing.

My colleagues were civil, articulate, and persuasive. Just as you’d expect among people trained to have minutely defined and immovably correct points of view, everyone had something important to say.

I left confused. My students’ personal writing (where, gasp, I allow them to say “I”) almost always possesses a spirit and vitality missing in their critical work, and when students’ personal writing is flawed, they seem more willing to correct it. At the same time, I do wonder if personal writing tests them as much as deconstructing and explaining literature. Writing about a subject outside yourself generally requires a higher order of thinking, and speaking as “a reader” instead of as yourself necessitates anchoring thoughts in discerning and resourceful detail and explaining your perceptions and conclusions precisely.

English teachers can write in a spirited way about something abstract and impersonal. They see all writing as personal expression, even if it’s not overtly so, and may obsess over Twain’s attention to clothing in Huck Finn or exhaust themselves refuting another scholar’s view of punctuation in Mrs. Dalloway. They are, in other words, freaks.

Literature fascinates a few of my students in the same way, and their work is inspiring. However most students aren’t future English teachers, and I could starve on the meager diet of inspiration provided by the desultory literary analysis I encounter. It may be thorough and strenuous, but it’s also dutiful and dull, seeking nothing much more than completion and the true path to “what the teacher wants” and a good grade.

Maybe the biggest question is, “How do you get students to regard critical essays as personal essays, as opportunities to reveal distinctive outlooks and a vibrant voice?”

Occasionally, I discover the personal in students’ critical work even when they can’t. Once I begin to recognize them as thinkers and learn their idiosyncratic habits of attention, I can understand one student forms uneasy bonds with protagonists and monitors his sympathy and antipathy with each act. I can work with that. Another notices the minor bric a brac of stories, the odd objects every story pulls into its vortex. I can work with that. Another student projects her current obsession onto the latest text and sees that obsession as the explanation for everything. I can work with that. I can work with any modicum of curiosity and fail only when I find none. Even the most perfunctory work can grant a glimmer of personality if I have the willpower to look and can invest in asking, “Why would this writer care about this subject?”

In graduate school (the first time) I wrote two master theses, one for each semester. The first was on Tennyson’s In Memoriam and the second on “Andrea del Sarto” by Robert Browning. I cared about In Memoriam because it described an emotional conflict I understood well, struggling over our (Tennyson’s and my) incapacity to convince ourselves of anything and our equally potent optimism the next effort might just accomplish the feat.

I cared about Andrea del Sarto because I am Andrea del Sarto. The poem describes a renaissance painter with sterling technique, capable of photo-realism long before anyone—not even da Vinci—thought of it. Del Sarto’s trouble, ironically, was spirit. For all his expertise, he never found as much life in his subjects as Michelangelo or Raphael or da Vinci did. Other artists’ imperfection bespoke a human embracing a human subject. In contrast, del Sarto sees his world as a still-life, a collection of things. Even people are things. Though his wife’s voice never enters the poem, del Sarto makes her dissatisfaction plain. He will never be revered as other artists are. Their commissions and prices will always dwarf his because they sense something real he cannot.

In the absence of heart, skill is cold and sterile. Being able to form a fine sentence—even a fine, interesting sentence—is nothing to forming one that’s true, that moves the receiver instead of asserts or proclaims its veracity. A writer who collects well-crafted sentences will be admired. A writer who stirs a reader will be loved. Praise for a perfect, fastidious product is nice, but Andrea del Sarto and I would gladly trade it for some sloppy sympathy.

And I may seem well off the subject here, but I’m not. The dispute over personal and critical writing is really a battle of expertise and sincerity. It would be wonderful to have both—to read only essays perfectly constructed to communicate enthusiastic adoration of literature, but, if I had to choose between perfect construction and personal truth, I’d rather be Michelangelo. If I have to pick skillful execution or sincere emotion, I prefer emotion.

Colleagues who answer the opposite way deserve and earn my respect. I’ll continue trying to instruct students to express their true selves in the indirection of third-person analysis. But my mind sees a clear distinction between saying something well and expressing my thoughts and, especially, feelings. Even if I seldom accomplish that task to my satisfaction, I want my students to try, and, to do so, maybe they need to speak afresh, as themselves, about something they’re sure matters.

8 responses to “Speaking Impersonally (And For Myself)”